Compulsive skin picking  is  characterised by the repetitive picking of the skin to an extent where damage is caused. Skin picking can be repetitive and ritualistic and it can be a way to reduce tension.

It usually starts in the face, however it can be carried out on any part of the body such as scalp, lips, nails, cuticles and nose. Acne and scab picking is a form of skin picking disorder.

Trichotillomania (trich), is when someone can’t resist the urge to pull out their hair,  they may pull out the hair on their head or in other part part of the body, such as eyebrows or eyelashes. It is more common in girls than boys. People with trich feel an intense urge to pull their hair out, after doing so, they feel a sense of relief (NHS, 2020).

Homeopathy  for Trichotillomania and Skin picking

These conditions are often linked to trauma, anxiety, obsessive compulsive behaviours and considered chronic issues (not just isolated episodes) consequently the homeopathic prescribing may need to be reassessed over time and usually more than one remedy is used over various consultations. Homeopathy  can’t be considered as a quick fix in these situations.

To prescribe a homeopathic remedy  is important to understand what is unique about the person skin picking, what characterises it  and makes it possibly  different from other peoples.  Here below are some examples of remedies that have  proved most useful for these conditions. This is not an exhaustive list.

The anxiety is usually around being tested and fear of being evaluated. Silica is a good acne remedy and potentially indicated for a person with acne and skin picking, low self confidence with a tendency towards perfectionism, indecisive, insecure,  the person usually  spends time choosing the right thing rather than what they want. They look easy going on the outside but they are actually stubborn. The person usually is not very  assertive.

Overworked, weak, fatigued, overstudied  and grief struck, the person doesn’t want to be alone, but at the same time dreads the company of strangers. There can be unsatisfied sexual desires.

Anxious feeling in the chest with possible palpitations there is grief after losing a person or a possession, Feelings of frustration are present and also there can be a sensation of a lump in the throat, people needing Ignatia are hypersensitive with a tendency to spams – this is a remedy for shock and  disappointment.

The theme that needs to be presentwith this homeopathic remedy is fear, fear on the verge of terror,  (fear of water can be a theme), there can be restless sleep and a sensation on the skin as if insects are crawling over it. Skin picking could have started since  shock, fright, high fever, head injury, hydrophobia or childbirth.

There is scratching and picking. A pins and needles sensation on the skin may be present.

There is extreme restlessness, they find it really hard to keep still, they keep moving. They are erratic and often impulsive, crafty, canny and sly, reason for what goes on can be due to a punishment, there can be anger or depression. Moods can alternate quickly. Thre is the sensation of insects creeping and crawling over skin. They can feel better from pressure and rubbing body parts (eg brushing hair and head in case of hair pulling or skin in case of skin picking).

All five senses are affected, skin picking/ hair pulling  is usually due to sensory overload,  The person lives in his/her own world, there is restlessness, excitement, talks fast, There is fear of imaginary things and he or she can become quarrelsome.

Bad tempered and sulky. Nervous, uneasy, weeps violently, fears society, shuns everybody, there can be confusion, fear restless and anxiety.

As already highlighted remedies that are useful in Triochotillomania and Dermatillomania are usually remedies that are used for anxiety, repetitive and ritualistic behaviours and obsessive compulsive disorders. The magic happens when the Materia Medica of the homeopathic medicine chosen is as close as possible to the person emotional and physical state and also when the medicine indicated aetiology (cause) is matched in the person medical history (eg never been well since childbirth or high fever for Stramonium).

If you find the description of homeopathic remedies difficult to understand and a bit ridiculous it is because most materia medicas have been written in the 18th century. They were written by medical doctors in an a language that is now almost obsolete and it takes a bit of getting used to. Materia Medica are big books that list the name and description of each homeopathic remedy, followed by the symptoms and temperaments that most often indicate each remedy’s use. I found these books fascinating. 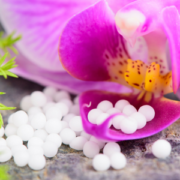